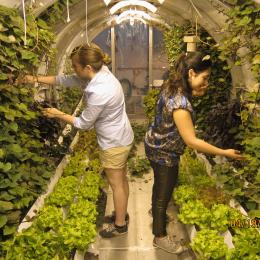 Marianna Yanes, a two-year Arizona Space Grant Intern/Intern Advisor, and a first-generation college student, was one of only two University of Arizona (UA) undergraduate students selected to receive a prestigious Arizona Centennial Achievement Award at the Fall 2013 Commencement ceremony on December 21, 2013.  Awardees are selected for their “integrity, achievements and contributions to their families and community.”

Marianna, who received her BS degree in Biosystems Engineering, grew up in Sonora, Mexico, and moved to Arizona when she was seventeen.  In the United States, she attended a high school where all classes were taught in English—a monumental challenge.  With perseverance, she mastered class content, graduated, and was admitted to UA.   At UA she found a home in Space Grant; many of her notable university achievements were gained through her two-year participation in the Undergraduate Research Internship Program, where she found her niche and passion working on the UA/NASA Space Grant Steckler II Lunar Greenhouse (LGH) Development team.  She was responsible for the day-to-day operations of the LGH system’s performance and energy balance studies, the daily remote monitoring of operations of the LGH-Outreach Teaching Module while it was on display at the Chicago Museum of Science and Industry (July 2012-January 2013), and served as an Intern advisor to two LGH Space Grant Interns from Pima Community College and others. In addition, she led countless LGH tours for schools, community groups, scientists and other interested individuals--and was able to provide tours in both English and Spanish.  Marianna has been offered a full scholarship to graduate school at the UA and has received similar offers from other universities.  She plans to enter graduate school in the fall of 2014 and ultimately build on her Space Grant LGH experience and start her own greenhouse company to help fight hunger on Earth in a sustainable, environmentally responsible way.