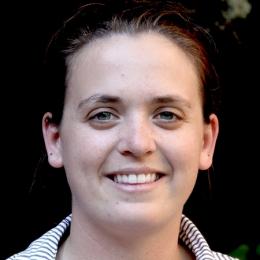 As a 2011 to 2012 NAU Space Grant Undergraduate Research Intern, Christine Cunningham investigated gyrochronology as a method of aging young brown dwarfs.  After completing a Bachelor of Science degree in Physics and Astronomy at Northern Arizona University, she was hired to work at the Smithsonian Submillimeter Array faculity on Maunakea as an Astrophysicist, responsible for operating the telescope array and organizing outreach activities across Hawaii. In 2016 she completed a Masters degree in Applied Physics from the University of Oregon,  where she focused on optical materials and devices and became interested in developing laser subsystems.  Upon graduation, she went to work as an optical engineer for Areté Associates in Longmont,  CO, developing cutting-edge laser defense systems.  She has now returned to Hawaii and her astronomy roots, where she works as a Science Operations Specialist at the Gemini Observatory helping to commission the new sodium laser guide star system, in addition to operating and observing with the telescope.