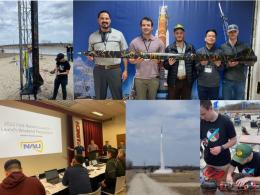 We are pleased to announce that the Northern Arizona University (NAU) Space Jacks team comprised of ME students from the Rocket Club and American Indian Science and Engineering Society (AISES) took 1st place overall this weekend in the First Nations Launch Competition in Kenosha, WI. Over the past academic year, students designed, modeled, built, tested and successfully launched and recovered a high-powered rocket coupled with a Cold Gas Thruster System (CGTS) payload system. The CGTS was the design challenge and had to control the rockets z-axis angular velocity during the coast phase of its ascent.

Awards that the NAU Space Jacks team received include:

This includes a grand prize of $3,000 and an invitation and travel stipend for a VIP tour at the Kennedy Space Center this summer. Furthermore, our team also received a Next Step Award for the upcoming academic year.

NAU will receive $15,000 in funding support to participate in the NASA Student Launch Initiative in Huntsville, AL in April 2023!

Congratulations! Go NAU Space Jacks Team! The hard work you have put into this project has paid off!