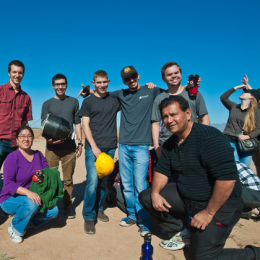 Reaching to the Sky and Beyond – PC’s NASA ASCEND Program and Faculty Profile: Ernest Villicaña

Ernest Villicaña could be sitting on a beach somewhere enjoying his retirement. After all, he deserves it after spending 40 years as an electrical engineer starting as a humble designer and working his way up to Vice President before becoming the CEO of his own company for 12 years. By his own account, he has deep experience in four fields of engineering – medical, military, integrated circuits, and energy.

Traveling Back to Class

Instead, Ernest traded in the flip flops and ocean waves for mentorship and education. He is now in his ninth year of teaching engineering at Phoenix College, paying it forward daily to students and engineering graduates.

“I bring a lot of that work experience to Phoenix College. I want to be here because it’s where I came through. I took all pre-engineering classes at Mesa Community college. I stepped on every land mine possible and if I survived it [my students] can survive it.” - Ernest Villicaña

In this way, he encourages students in his engineering classes to push past their perceived limits and reach for more. He assigns a project in his EC103 class for students to become CEOs of their own companies. The students must develop the company and create a plan for funding it. At the beginning of all his classes, he offers 40-minute one-on-one mentoring sessions to each student and mentoring continues for some students throughout the semester.

Ernest sees himself in many of the students who pass through his classroom. They all possess a wealth of potential but may struggle to find the keys to unlock it. Many Phoenix College students lack the financial resources necessary to purchase computers and electronic kits in order to expose themselves to the software prior to entering college.

“Student today have so much intellectual capability today. I was probably an academically underachieving student in my undergraduate program. The graduate program was much better and my profession – it was off the charts! I couldn’t have choreographed it any other way. My current students are so much better than I was [at their age]. If we can move them past their financial issues and find ways to manage family obligations, they are gold! - Ernest Villicaña

In 2015, Ernest’s passion for students led him to take on a second “job” at the college when he registered Phoenix College for the NASA ASCEND Program. This program takes the best and brightest science, technology, math, and engineering (STEM) students from across Arizona to compete in designing and flying balloon-launched scientific payloads up to 100,000 feet into earth's atmosphere. Colleges and universities compete as teams for friendly competition on launch days.

“Every team uses different techniques to launch balloons and it’s great to learn from each other and collaborate. They share notes and talk about how they solved problems, etc. It’s competitive but collaborative. Though we were the last to enter the consortium, we are in the top 3 now. We’ve elevated our capabilities.” - Ernest Villicaña

This program allows students to gain technical knowledge, problem-solving, and practical skills working on a hands-on, relevant, real-world engineering project. Students measure atmospheric conditions (e.g. temperature, pressure, radiation field at 50-70k feet, and sun effects at various levels).  Everything is computer controlled so students learn about electronics, mechanics, and software. They build housing to protect the internal system and must keep it under three pounds.

Over the past six years, PC’s NASA ASCEND program has seen 12 launches and 75 students participate. Diversity is very important to both Ernest and the NASA grant which funds the program. In four of the last five semesters, PC team leads have been female students.

The program is competitive. Approximately 14 students apply in the spring, are interviewed, and go through a summer workshop where they are trained on software development, electronics, sensor technology, and how to build housing. In August, eight to 10 students from the workshop are selected for the final team. The program is two semesters long and is a large time commitment. Students on the team meet every Friday for many hours to work on their launch plans.

Ernest sees the NASA ASCEND program as a fantastic way to keep his students excited about engineering.

“Most students transfer to Arizona State University (ASU) to continue in engineering after the program. Some have gone on to participate with the ASU team and two of my former students have become team leads.  We have a great relationship with ASU.” - Ernest Villicaña

Students lucky enough to have Ernest Villicaña as their engineering instructor have a connection for life. His responsibility to his students extends far past the moment the final grades are entered.

He knows that many bright engineering students falter in their third year of an engineering program – that is, their first year at their transfer university. To combat this, Ernest connects his students to one of his former students currently taking classes at ASU. That new connection helps the soon-to-be transfer student pick classes, connect with other engineering students, and select the best professors.

“The work load is heavy. The peer mentorship gives students the confidence that they can perform well. Junior year is a challenge and the toughest for engineering students. About 50 percent go on to complete their four-year degrees, which is beating the model for the typical transfer success rate (which is 2.5 out of 5).” - Ernest Villicaña

Ernest instills in his students a sense of obligation and pride in giving back by assisting incoming PC students. Many of his former students, hailing from such notable firms as Intel, McDonnell Douglas, Orbital Sciences, and Honeywell come back and present in his classes.

Through his considerable life-long career connections, a dedication to the full lifecycle of the student experience, and strong work ethic, Ernest has built an incredible foundation of support for Phoenix College engineering students.

“Part of my job is beyond the classroom. Mentoring goes beyond PC commencement. I mentor former students who are applying for jobs. I have a lifetime of connections and I want to help my students to buckle down and get the degree. I want them to go further with the degree and take it to the extreme. I had the chance to put my foot on every rung on the ladder in building my career. I want my students to get out there and reach – reach for more! You will be satisfied with what you accomplish when you do that. This is a once in a lifetime opportunity.

I chose PC because I’m Hispanic and I want to help those underserved students who are struggling. If they see someone that looks like them who's already done it, it’s impactful.  I want to see four out of five make it through transfer. That’s my goal." - Ernest Villicaña

Learn about our Engineering Program at PC and become part of teams like NASA ASCEND, yourself! Check it out here: https://www.phoenixcollege.edu/engineering

Learn about 2 female PC Students from the NASA ASCEND program who were selected to represent Arizona in Washington DC for the 30th anniversary of the NASA space grant.