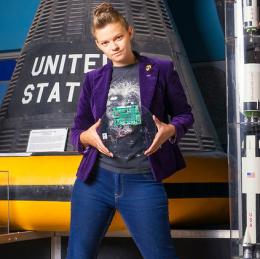 "The Club has opened up several opportunities that I have taken advantage of to include the NASA ASCEND and the NASA RockOn! Undergraduate research programs. I never imagined I would launch something into suborbital space (she launched a project into outer space on a sounding rocket at NASA's Flight Facility in Virginia) this early in my career. Playing a part on student engineering teams and becoming engulfed in the Tucson science and engineering community has given me a sense of belonging and a drive to create something profound for this world in the area of robotics and space exploration. I am currently working on a new prototype for the High Elevation Antarctic Terahertz (HEAT) Telescope project through the University of Arizona Steward Observatory Solar Lab. The telescope will ideally give us a better picture of our universe by processing frequencies beyond the visible light spectrum."