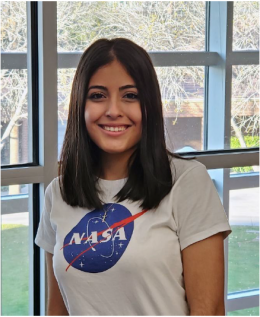 Phoenix College (PC) student Sandra Montero has been selected to participate in a Space Camp at Biosphere 2. The program is a collaboration between the Arizona NASA Space Grant Consortium, the University of Arizona’s Biosphere 2 (B2), and Kyoto University, with funding from the Japan Aerospace Exploration Agency.

This highly competitive program allows undergraduate students to participate in a five-day research-intensive experience, performing experiments in B2’s ocean, desert, and rainforest biomes and staying on-site at the Biosphere facility in Oracle, Arizona.  Sandra was selected for this program due to her outstanding application; she is also part of the Space Grant Program's ASCEND high-altitude ballooning program at Phoenix College, advised by PC faculty Ernest Villicaña.

When she was just 12 years old, Sandra realized she had no future in her country. Sandra is from Venezuela, which is experiencing socioeconomic and political struggles, resulting in hyperinflation, severe food shortages, and high crime. When she was young, Sandra dreamed of becoming a chemical engineer. And when she entered high school, she began applying to study in the United States. She was accepted at a university, but quickly realized the high cost of attendance and living expenses would be a financial burden for her family.

Sandra explored other options, and realized that attending a community college for the first two years of her bachelor’s degree would save her thousands of dollars.  A family friend lived in Phoenix, so Sandra began exploring community colleges in Maricopa County.  She set her sights on Phoenix College, and in 2020, Sandra moved to Phoenix to begin studying at PC.

Sandra smiles as she remembers the transition to Phoenix, and working with PC’s International Education Department, most especially with Program Advisor Paula Chalarca-Chavez. “Paula was great”, Sandra says. Adding that Paula made the transition to the U.S. so smooth, despite the issues they encounter acquiring Sandra’s educational and medical records from Venezuela.

Sandra wanted to fully immerse herself at PC, so she joined the STEAM Club during her first semester, and is now the club president. On the first day of the STEAM Club meeting, Sandra eagerly walked into PC professor Villicaña’s classroom, only to realize it was an engineering design class – not the STEAM Club meeting. She and Professor Villicaña talked, and he told her about PC’s ASCEND Program (Aerospace Scholarships to Challenge and Educate New Discoverers), a Space Grant program designed to engage undergraduate students from across Arizona to work on the various cycles of a space mission.

Sandra was intrigued, and over the past two years, she has participated in various STEAM events and activities, serving recently as lead mechanical engineer on one of the club’s high-altitude balloon launches. And, she’s taken nearly every science course PC offers, saying she’s loved every one of her professors, and happily calls them all part of her Phoenix family. Sandra says Professor Villicaña has been especially impactful, encouraging her to apply for the NASA Bootcamp.

She reports to Biosphere 2 on February 13, and will be partnered with a peer from Kyoto University to conduct research in the desert biome, as part of B2’s Mars exploration project.  When asked why she wanted to participate in the NASA bootcamp, Sandra explained that “As engineers, we do not work by ourselves, we work on teams, which means we have to listen, think, suggest, decide and act altogether.”

Professor Villicaña says that Sandra “Is well-suited for the team work”, adding that “Two years ago, Sandra entered the demanding engineering curriculum at PC and she has excelled with honors. What stands out in this lofty achievement is that she has invested any extra time to extend her social and academic range by participating in extracurricular activities, all while working part time. Being so far away from her parents at just 18 years old has likely added to her challenge. These extra activities have elevated her understanding and passion for engineering to a new level and have greatly boosted her confidence.  Sandra has proven her mettle and was ready to take on more demanding research opportunities before transferring to a University.  The NASA Space Camp is the perfect opportunity, which will expose her to totally new and complex engineering concepts while also providing her the chance to collaborate with international students and professors. I am confident that Sandra will make us all proud and be an excellent representative of Phoenix College and its engineering program.”

Sandra successfully navigated the complex transition from Venezuela to the United States, and has immersed herself in her new culture and college community. She says she is proud and excited to be the only community college representative at NASA's upcoming Bootcamp, and looks forward to the intercultural experiences as well as the research.