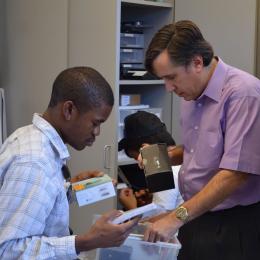 Since joining AZSGC in 2008, SMCC has been phenomenally successful at using their involvement in the AZSGC ASCEND! (balloon sat) program to engage students, and ultimately reshape the college’s engineering program. ASCEND! began at SMCC as an extracurricular project for engineering students, and became a class in 2009. Ultimately, the popularity and effectiveness of the class led to a redesign of the engineering curriculum to emphasize on hands-on activities--in keeping with current educational theories--and student enrollment grew markedly.

As a result, beginning in 2010, Frank won the first of two Goodrich Foundation grants that facilitated upgrading the SMCC laboratory facilities and paying modest stipends to participating students. Goodrich support also enabled the ASCEND! course, heretofore devoted to designing and building payloads for launch via high altitude weather balloons, to expand to include other design projects.

Nearly simultaneously with the first Goodrich Foundation grant, SMCC was approached by the Honeywell Corporation about the possibility of setting up an internship program, primarily related to a Honeywell contract for a portion of the Orion spacecraft.  As a result, what started as a project to build balloon payloads to simulate the experiences needed to work in the aerospace industry led to even more direct connections to such careers. One SMCC ASCEND! alumna recently completed a bachelor’s in engineering degree at ASU and was hired by Honeywell, and many others have gone on to study engineering at four-year universities.