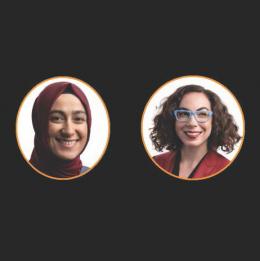 University of Arizona astronomers Erika Hamden and Burçin Mutlu-Pakdil have been selected as American Association for the Advancement of Science (AAAS)  If/Then Ambassadors.

Hamden and Mutlu-Pakdil are two of the 125 women selected by the AAAS and Lyda Hill Philanthropies to serve as high profile role models to the next generation of women in STEM and to empower innovators currently in the field. Ambassadors come from varying professions, such as fashion, sports, business and academia. They will connect with young women  across multiple media platforms to provide better portrayals of women in STEM and help generate interest in STEM fields.

'There is no doubt that science is the answer to solve many of our country’s most challenging issues and we need all of our nation’s critical thinkers addressing these issues,' said Nicole Small, president and CEO of Lyda Hill Philanthropies. 'Women make up nearly half of our population yet only a fraction are entering STEM-related fields. This is why we’ve committed more than $25 million to ensure that women are empowered to change the world and serve as high-profile role models for the next generation of STEM pioneers.'

'I want to help the people that are coming up behind me and show people that there are different ways to be a scientist,' said Hamden, an assistant professor in the UA Department of Astronomy and Steward Observatory. 'You can be a woman scientist, dress however you want, and be more brash about things.'

Hamden grew up in New Jersey and received her doctorate in astronomy from Columbia University. Her past work has included developing ultraviolet detector sensors and balloon-borne telescopes to detect emissions of the intergalactic medium – the hot, X-ray emitting gas that permeates the space between galaxies.

Recently, she has been developing a mission concept for a trailblazing new space telescope called Hyperion, which aims to detect low levels of molecular hydrogen in the universe, offering clues about the formation of stars and galaxies.

Earlier this year, Hamden received a Presidential Early Career Award for Scientists and Engineers, and she was named a 2019 TED Fellow.

In addition to her research, Hamden organized a workshop to assist the next generation of space scientists in writing effective grant proposals to pursue their own research projects.

Mutlu-Pakdil, a postdoctoral research associate at Steward Observatory, grew up Turkey and moved to the U.S. after receiving a bachelor’s degree from Bilkent University.

'My first day of college, a male professor reached out to me and said ‘Are you crazy? You are a woman leaving your hometown to just study physics. Are you sure?'' she said.

Mutlu-Pakdil went on to earn her doctorate in astronomy from the University of Minnesota, where she made headlines in 2017 for discovering a new, rare type of galaxy that was named in her honor: Burçin’s Galaxy.

Mutlu-Pakdil is continuing her research on galaxies at the UA, focusing specifically on how small galaxies form and interact. In 2018, she was a TED Fellow, in addition to being named one of the Junior Chamber International's Ten Outstanding Young Persons of the World.

Mutlu-Pakdil, a first-generation college student, says she comes from a family that was unable to pursue higher education due to many financial and social strains present in Turkey.

'I understand the challenges that minorities face, and I really want to improve the climate in academia to welcome everyone from every background,' she said.

You can see their TED Talks HERE and HERE.

You can see enlargements of their If/Then social media cards HERE and HERE.

(The above text was written by Rachel Abraham, NASA Space Grant writing intern.)