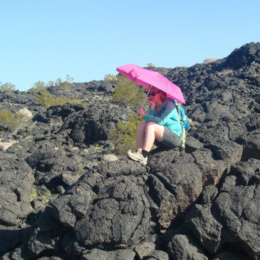 Exploring a Desert Portal to Other Worlds

"Ali Bramson clutched her neon pink umbrella as she trekked across the frozen lava that spilled from Amboy Crater in California’s Mojave Desert. She and her fellow University of Arizona graduate students were tasked with identifying the boundaries of different eruptions of the extinct volcano, then unfurling their bright umbrellas to mark the spot. From an airplane overhead, her professor and another student photographed the sites to record the findings.

'We compared where we had mapped the different lava flows from the ground to where we had mapped the lava flows based on images taken from above by airplanes and satellites,' said Bramson, who is now a postdoctoral research fellow at the UA's Lunar and Planetary Laboratory, or LPL. 'It was a great way to learn about how looking at geological features from different perspectives and spatial scales affects your interpretation.'

Bramson was one of the latest in a long history of LPL graduate students to take a planetary geology field trip to learn how Earth’s geological formations can serve as analogs to formations on the moon, Mars and beyond.

The tradition began more than 50 years ago – before Neil Armstrong and Edwin 'Buzz' Aldrin left their bootprints in the moon's powdery soil – when UA researchers led by Gerard Kuiper worked with NASA to map and understand the moon’s surface from a geological perspective. 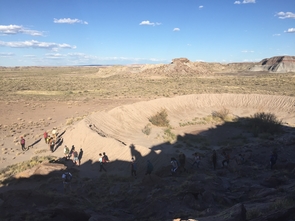 To do so, Kuiper’s graduate students studied field geology, which spurred the formation of the UA Department of Planetary Science and the field trips within it.

'The smallest features we could photograph from Earth were no more than a half-mile across, so the biggest problem was to understand the human-scale structure of the lunar surface,' said William Hartmann, one of Kuiper’s graduate students who helped create the Rectified Lunar Atlas. Hartmann later co-founded the Planetary Science Institute, or PSI, in Tucson. 'To study possible lunar surface textures, we Kuiper graduate students in the early ‘60s – who had grown up in leafy-green, non-volcanic parts of the U.S. – made many camping trips.'

Clear skies, clusters of telescopes, and thriving astronomy, geology, and atmospheric science programs lured Kuiper, considered the father of modern-day planetary science, to Southern Arizona in 1960. But it is the Sonoran Desert's arid climate that preserves the geological features of interest: impact and volcanic craters, lava flows, cinder cones, strata within canyons, and more.

'These geological processes are beautifully exposed and preserved in the Southwest,' said LPL assistant professor Christopher Hamilton, who co-leads the LPL graduate student field trips with Shane Byrne, assistant department head of planetary sciences. Their trips have allowed students to explore sites across the Sonoran Desert and as far away as Hawaii and Iceland.

'The field trips also offer a way to see things, like lava flows or sand dunes, up close that for other planets we often have to rely on images and data from spacecraft to study,' Bramson said. 'It helps connect what we see from orbit or telescope to a ground truth by being able to walk around and sample similar features here on Earth.' 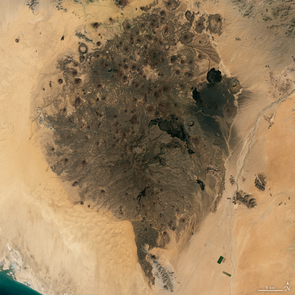 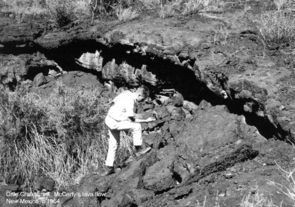 The Pinacate Peaks are one such example, and they are riddled with lunar analogs, according to Kuiper’s graduate students. More than 400 volcanic cinder cones and nine large volcanic craters have pockmarked the range, which is located mostly in the Mexican state of Sonora between the Arizona-Mexico border and Puerto Peñasco, and is surrounded by giant sand dunes.

'The Pinacate region has wonderful lava flows and big half-mile volcanic craters,' said Hartmann, who in 1989 wrote Desert Heart, a popular book about the area. 'One of the big concerns was that the lunar surface might resemble extremely rugged types of lavas with spikey, jagged rocks all over the place. The Apollo astronauts later trained for lunar exploration in that same area.'

Dale Cruikshank, a research scientist at NASA Ames Research Center, also studied under Kuiper and remembers the trips well: 'We would crawl inside the volcanic craters and around and examine as a geologist would. Kuiper was tromping around lava flows with us sometimes.'

Kuiper’s students also visited Meteor Crater and Sunset Crater, both near Flagstaff in Northern Arizona, to understand the difference between craters formed by impact and magma chamber collapse, respectively.

'Hartmann and I got a personally guided tour of Meteor Crater by Eugene Shoemaker,' Cruikshank said, adding that Shoemaker worked with Kuiper’s group during the robotic missions that preceded the crewed lunar landings and created the astrogeology branch of the United States Geological Survey in Flagstaff. 'Others in Flagstaff were also very good to us and flew us around in an airplane. It was terrific.'

Kuiper’s students also ventured into the Dragoon Mountains, where they examined rocks types that might be found on the moon, and to Hawaii, where they investigated how magma flows and cools as it might have on the moon billions of years ago, Hartmann said.

Multiple faculty members from the Department of Geosciences led the first field trips, but the most prolific of all was Spence Titley. Now retired, Titley was a leading mining and resource geologist at the university. During some of the field trips, he trained Apollo astronauts in lunar geology and recommended lunar features they later photographed from orbit. In 1964, he collaborated with the U.S. Geological Survey to map the moon for the Apollo program using the McMath-Pierce Solar Telescope on Kitt Peak. 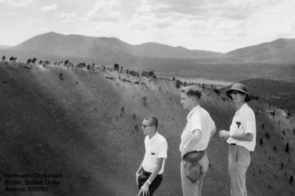 William Hartmann, Dale Cruikshank and Alan Binder – all graduate students studying under Kuiper – stand on the rim of Sunset Crater near Flagstaff, Arizona on August 25, 1963. (Courtesy of Dale Cruikshank)

'Field trip locations are not just focused geographically, but also by process,' Hamilton said. 'With each trip you’re not just visiting a place, but different times in Earth’s history.'

Most field trips focus on investigating volcanic landscapes. Volcanic activity is the most dominant process in planet formation; It underpins planetary creation and evolution, Hamilton said. The moon is a good example: The dark spots were once thought to be oceans, but they are actually volcanic lava flow fields. About 3.5 billion years ago, the lunar surface was glowing with red-hot magma, he said.

Other processes highlighted on LPL field trips include impact cratering, tectonic plate movement, and erosion by water and air.

'When you build a model that tries to describe the complexity of planetary evolution, you have to make a cartoon version of it,' Hamilton said. 'Going into the field and determining the necessary detail of the model – what to leave in and out – is important to understand.'

'We discuss how features might work similarly or differently on another planet. Other planets or moons might have different gravity, atmospheres and sunlight, for example,' Bramson said.

Seeing these formations in real life helps students interpret remote sensing data sent back from different places in the solar system, says Hamilton, whose most active area of research is in terrestrial analog study. He travels to extreme environments to test how robotic instruments might perform on alien worlds.

'Climbing around lava flows similar to those on the moon or Mars, or dunes on Mars and Titan, provides a connection with otherwise abstract data,' he said.

'We took students to Cape Canaveral to look at coastal processes we can’t see in Arizona as an analog for Mars, which has many shorelines associated with the northern ocean and impact craters that filled with water to create lakes,' Hamilton said, adding that Saturn’s moon Titan also has oceans but composed of liquid methane and water ice as hard as rock. 'It’s another permutation of the same processes.'

Bramson entered her graduate program with a bachelor’s degree in astrophysics, so, like many of her classmates, the field trips were her primary lesson on geology. But she learned about more than just geology, she said.

'With all the time spent together – driving to the field sites, hiking and discussing the landscape, camping, making food around the campfire at night – I got to know my fellow graduate students a lot better on these trips,' she said. 'Many became some of my best friends and collaborators on scientific projects.' "