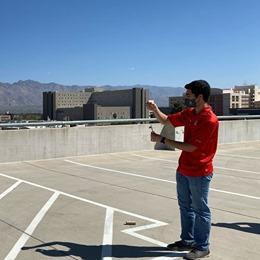 A number of countries are enforcing lockdowns as coronavirus cases spike once again, but those restrictions are not stopping a globetrotting mission at the University of Arizona.

The high-altitude balloons are equipped with a solar panel, computer board, telemetry and radio. The entire thing weighs less than 20 grams. “Our altitude for our pico balloons is between 35,000 and 40,0000 feet, which put us right smack dab in the middle of the fastest-speed jetstreams so we are able to calculate things such as flowrate,” said Josuah Crest, a senior mechanical engineering student at Arizona. “On earth, our pico balloon tracker is able to give us GPS location, temperature, pressure, speed, direction, those different data sets. Then we are able to use that to take measurements of the jetstreams here on Earth,” Crest said.

Crest worked with the team to launch its first pico balloon earlier this year.

“A lot of other people who have done these balloons, they only get a couple of hours, maybe a day if they are lucky,” said Michael Debbins, a senior. Team members were surprised and encouraged when their balloon stayed aloft for 10 days and reached a top speed of 289 mph. “We made it from the UA, all the way across the continental US, across the Atlantic. It went up north by Great Britain, then down through Germany, Belgium. It stayed in Turkey for a couple of days and started going back the other direction towards Greece, then it caught a jetstream and shot straight across the Middle East, Asia and Japan,” Crest said. Crest said they lost track of the balloon when it reached Japan.

“We are afraid it might have run into a storm over the Pacific either the electrical components were damaged or the balloon envelope failed,” Crest said. On Friday, they launched four more balloons. “What we really want to do here is to develop a good platform for science to happen. Getting good data on the state of the atmosphere is really important because it not only helps us understand earth’s atmosphere but if we are able to perfect this methodology on Earth, then we can start to investigate what can we do on other planets,” Debbins said. “The big idea is that there is a possibility for microbial life living in the clouds of Venus. In order to detect that, we would have to develop some miniaturized life-detection equipment,” Crest said. The team would then attach that equipment to pico balloons. “Launch swarms of them so you have a constellation and a ring around Venus and then you scan for different regions that have the highest potential for life,” Crest said.

Click here to track the pico balloons launched on Friday.