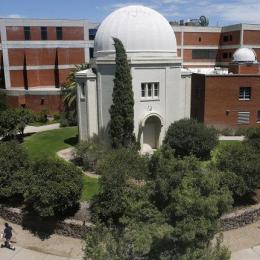 'I’m going to be focusing on dark matter, which is 85% of all the matter in the universe, but it’s something we don’t know a lot about,' he said. 'So, I’m going to talk about the history of that process and key pieces of evidence that have led us to understand that we are dominated by dark matter. I’ll also discuss what it might be and where we go from here.'

The hourlong talk will begin at 7:30 p.m. on Monday, Oct. 21, in room N210 of the Steward Observatory at 933 N. Cherry Ave. After the lecture, attendees will also have the opportunity to view the night sky from the telescope in the historic Steward Observatory dome.

'Astronomy is a fascinating topic. We have a real strength here in Tucson with a high standing astronomy department,' Zaritsky said. 'It’s a good opportunity for people in the community to come and hear the latest astronomy research and understand how weird our universe can be, and people should take advantage of that.'

With a large Spanish-speaking community at the university and in Tucson, the talk allows the observatory to expand its reach and provide educational opportunities for more than just English speakers, according to Zaritsky.

'We have this public lecture series every two weeks on different topics. Our talks are aimed at the general public. I know sometimes the science jargon can be a little intimidating, so we’re trying to make these lectures understandable,' he said. 'By making at least one per semester in Spanish, we’re hoping to perhaps make it more understandable to that segment of the community.'