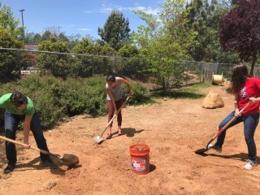 By Alana Minkler - The Daily Wildcat

"Roy Chavez, a lifelong resident of Superior, Ariz., a small mining town approximately 60 miles east of the Phoenix metropolitan area, grew up wondering why they couldn’t grow grass in their front yard and why they played on a dirt football field.

His father was one of eight siblings who all died from some form of cancer. His was a form of pancreatic cancer, Chavez said.

'It’s all because of the smelter smoke and the settling of the solids from the smelter,' Chavez said. 'Is it still with us? I’m sure it is. How did that impact us?'

Chavez and others formed a group of people, the Concerned Citizens and Retired Miners Coalition, to seek answers to their questions because they were concerned about their families’ health after decades-long mining in the area and an approved project, the Resolution Copper.

They reached out to University of Arizona assistant professor Monica Ramírez-Andreotta for help this past summer.

Ramírez-Andreotta, who teaches environmental science and public health, is the founder and director of Gardenroots, a citizen science project. One of her research projects focuses on the community of Superior, Ariz. and whether it has been exposed to harmful metals emitted by legacy copper mining smelters.

A smelter is essentially a giant chimney but for a mining facility, explained Iliana Manjón, a medical student at the UA. While mining, tiny particles in the dust and smoke are dispersed into the air.

Ramírez-Andreotta said they received a seed grant from the College of Agriculture and Life Sciences and the Center for Environmentally Sustainable Mining * to look into environmental exposures to arsenic and cadmium from dust, soils, water and plants in mining communities.

Now they will study homes, gardens and recreational areas to test for harmful mining byproducts in Superior with the help of community members who will take their own samples.

Superior is a town that was built around mining, Chavez explained.

Chavez has served as a council member, mayor, the town manager, as well as the chairperson for the non-profit grassroots organization, the Concerned Citizens and Retired Miners Coalition.

Throughout the years, Chavez’s relatives and friends told him, '‘This is a mining town and we understand that,’' Chavez said. 'But unfortunately, there’s a lot of ignorance in the industry in reference to the working for and production of not only the copper commodity, but the pollutants and the damage to the environment.'

For the past two decades, the CCRMC has been 'fighting off' Rio Tinto, one of the major mining operations worldwide, as well as Magma, the shut-down copper mine, Chavez said.

According to Chavez, the legislation for the land exchange between Magma, the government and Rio Tinto wasn’t handled appropriately and they circumvented the National Environmental Policy Act process.

NEPA is a process set up to determine if selling public lands to a private sector is in the best interest of the public, according to the United States Environmental Protection Agency.

In 2015, former Senator John McCain authorized in the National Defense Authorization Act for the military budget.

'In Arizona, mines are under state scrutiny,' Chavez said. 'Unfortunately, we have some of the weakest mining laws in the nation.'

'It brought up a lot of questions,' Chavez said.

The CCRMC started looking at current and past situations with health and the environment in their location.

'It would be nice to get a clean bill of health from the University of Arizona’s initial analysis, and if not, I certainly don’t want people moving to Superior and then finding out at the end of the day that the land they’re on is toxic,' Chavez said.

'The community members were the ones that brought up the fact that they’re concerned about their environmental quality,' Manjón said.

Citizen science, the approach Gardenroots has taken, is a way for the community to know what’s going on and keep these main sources of contamination accountable, Manjón said.

Ramírez-Andreotta said if people know their environmental quality, they can make decisions or change actions, or become more active politically regarding environmental decision-making.

Ramírez-Andreotta said that that, combined with going into vulnerable communities and seeing people not involved in the decisions 'just seemed so obscure.'

Her goal was to increase the number of people who understand what’s going on and are part of the 'decision-making process and the solution-generating design,' Ramírez-Andreotta said.

'It really establishes a good relationship with academia and the public,' Manjón said. 'It’s not just us being intrusive.'

According to the Gardenroots website,“One in four Americans lives within three miles of a hazardous waste site, 1 of which there are roughly 355,000 in the U.S.”

Dust is spread by the dry and arid Southwest air conditions, which can result in “the long-range transport of metal-contaminated aerosols unearthed by historical mining operations, such as arsenic, cadmium, and lead,” the website states.

Samples of dust will be collected on frisbees or TSP monitors to collect all particle sizes in the air, Manjón said.

They will then analyze samples of the particles and see how much is made up cadmium, lead and the mining metals that are harmful to health.

'The whole purpose of the project is to essentially find a way that we can better localize these contamination spots,' Manjón said.

The government has air monitors across Arizona, but it doesn’t say the actual concentration of lead, arsenic or cadmium, for example, in one specific house or one specific community, Manjón explained.

'So that’s what we want to do, is better improve how you can find that out, being low-cost, effective and something that is easily accessible,' Manjón said.

Samples are collected by a community and sent to the lab, where they analyze it to find out how much arsenic, lead and other metals are in it. The information then gets relayed back to the community in information that is digestible, Manjón explained.

'It is difficult at this time in the community, because … you have this big mining project that’s being planned at the same time,' Chavez said.

'I was thankful that professor Ramírez-Andreotta said they had funding,' Chavez said.

On July 27, Ramírez-Andreotta and her student researchers did a training workshop to teach about 20 community locals in Superior how to collect samples of soil, water and food.

Eventually the data set will get published at the end of the year and community members can make action when they have the correct information, Ramírez-Andreotta said.

'It’s nice to see the application of their research,' Ramírez-Andreotta said, 'and to know that it gets into the hands of those who need it.' "