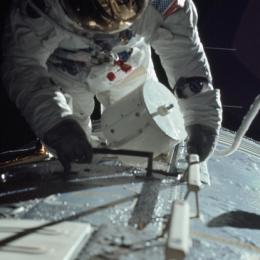 "Mapping the Moon and Worlds Beyond"

Photo: NASA (Apollo 17 astronaut Ron Evans had to embark on a spacewalk just to retrieve a cassette of film, which recorded data from the first radar mapping instrument mounted on a spacecraft.)

In 1972, it took an astronaut going on a spacewalk to do what Lynn Carter now can do with a few mouse clicks over lunch.

Carter, a planetary science professor at the Univerity of Arizona Lunar and Planetary Laboratory, points to a small, framed photograph above her desk. It shows the Apollo 17 spacecraft, the last crewed mission to the moon, cruising high above the grey, cratered expanse below.

"See that little antenna sticking out there? That was the first planetary radar on a spacecraft, and while it went around the moon, it pinged the surface," she said. "Each time it hit a different rock layer, it reflected a signal and recorded it on film."

One of the things the Apollo 17 astronauts were tasked with doing was mapping the moon's surface from the bird's eye view of their orbiter. In addition to photographing the obvious – topographic features like hills, craters and boulders – the radar antenna allowed them to reveal hidden geologic features underneath the moon's surface. The radar data were recorded on old-fashioned cassette tapes stored underneath a hatch that was only accessible from outside the spacecraft. To retrieve the film, astronaut Ron Evans had to put on a spacesuit and wiggle through the hatch of the Apollo capsule while it hurtled through space somewhere between the moon and the Earth at almost 25,000 miles per hour.

"Today, it's totally different," Carter says. "Everything is digital, and the instruments have much better resolution. We can see things on Mars from our living room that you couldn't see even if you could travel there and stand on the surface yourself."

Carter specializes in making maps of the unseen: using data obtained with ground-penetrating radar instruments, she visualizes and interprets features buried under the surface of planetary bodies like the moon, Mars and Venus.

To a planetary scientist like Carter, mapping another world is about much more than figuring out what is where on the surface and how to get from point A to point B (although navigation is becoming an increasingly important goal, with efforts ramping up to send astronauts to new horizons such as Mars or near-Earth asteroids).

"We look at planets to understand how they formed," Carter says, "and also to better understand features here on Earth that have been obscured by the very geologic processes that make our planet special. Studying other objects in the solar system is a way to study things that didn't turn out the way they did here on Earth."

Take Venus, for example, Earth's next-door neighbor and Carter's "favorite planet," as she readily admits. Even with the most powerful telescopes, we never get to see its surface, which is permanently shielded from view by a broiling shroud of clouds. Until the 1960s, sci-fi novels speculated about a lush, tropical world covered in jungles.

"Radar crushed that idea, as it unveiled a solid, super-hot surface with many volcanoes." Carter says. "All of a sudden, Venus did not look hospitable at all."

Unlike the explorers and cartographers who ventured out to map the Earth from land and sea, planetary scientists have to map from afar, looking through telescopes, or, if they're lucky enough to get a spacecraft mission funded, from orbit.

A Coffee Table on Mars?

One of the most successful visualization missions is HiRISE, which is led by the UA. HiRISE is a high-resolution imaging camera that has photographed Mars in unprecedented detail while orbiting the red planet aboard NASA's Mars Reconnaissance Orbiter for more than 10 years. The images are so detailed that over the course of a decade, after snapping 62,712 images, it has covered a mere 3.5% of the Martian surface. But coverage was never the goal – rather, HiRISE was sent to Mars to find future landing sites and to provide image that will help scientists understand the ancient and present-day geologic processes of Mars. The planet has proven to be surprisingly active in spite of the fact that it is a cold, dusty world lacking plate tectonics or a magnetic field and whose atmosphere largely wafted off into space.

HiRISE, whose eye is sharp enough to spot a coffee table (if there was one) on the ground from 180 miles above, is now in its fifth extension and still going strong. At the time it launched, similarly detailed maps of Earth were classified and only accessible to the individuals at the Pentagon, said Alfred McEwen, UA Regents' Professor of Planetary Sciences and principal investigator of HiRISE.

"What we thought to be ancient dunes, for example, frozen in time for possibly millions of years, turned out to be changing constantly."

HiRISE has seen a whole suite of ongoing activity including new impact craters, where the impacting meteorite blasted water ice out from underneath the planet' surface, erosion gullies and other features, some so unearthly that planetary geologists like McEwen are still struggling to explain their origin with certainty.

"We keep finding new things, such as features in the polar regions that we call spiders," McEwen says. "We think they're caused by carbon dioxide gas flowing underneath ice sheets, carving the surface topography. Another recent discovery is boulders that slowly move downhill, possibly driven by the seasonal expansion and contraction of ice underground."

Taking pictures is only the first step in generating a map of a planetary surface accurate enough to allow landers to touch down without crashing into undiscovered boulders or prevent robotic rovers from getting stuck in loose sand.

"To make a map, you have to understand the geometry of your images and mosaic them together. And then you have to change the perspective to what it looks like straight down, unless the originals were acquired that way," McEwen said of the process called orthorectification.

Orthorectification is necessary to derive the topography from an image, he explains. The UA scientists who produced the first detailed atlas of the moon used a rather analog, but elegantly simple setupto accomplish this. These days, it is done by the keen eyes of specially trained people and sophisticated software.

Some of the other challenges facing cartographers of the solar system are how to define sea level when your object of study doesn't have a sea or how to nail down coordinates on an object that's not exactly spherical or constantly shifts its shape.

"Many of the Jupiter satellites are what we call triaxial ellipsoids," McEwen says. "Their three-dimensional shapes change with the strong tidal forces under Jupiter's gravitational field, and that is a real challenge if you want to do precision mapping."

Measuring such changes is interesting for its own sake, however, because it reveals clues about the interior properties of those objects that would be difficult or impossible to study otherwise, McEwen adds.

UA scientists and engineers have pushed the field forward by designing instruments and cameras that have flown on several space missions to map unknown territory, including Mercury, the planet closest to the sun, Saturn's moons Titan and Enceladus, and Jupiter’s moon Io. They also are working on proposed instruments for future mapping projects that include Earth's moon, Mars and Europa, Jupiter's large moon whose subsurface water ocean is considered a hot candidate for extraterrestrial life.

Most recently, UA scientists are nearing completion of the most detailed map ever made of any solar system body, including Earth: cameras designed at the UA are scanning the rocky surface of Bennu, a near-Earth asteroid about as tall as the Empire State Building, and the team of the UA-led OSIRIS-REx sample return mission mapped Bennu's surface down to the inch. Being able to select a safe site for the spacecraft to touch down and grab a sample is a logical prerequisite for the mission, which is poised to return a sample of pristine asteroid material to Earth in 2023.

"By the time we're done with the characterization of the candidate sample sites, we'll be able to see an object the size of a penny," says Daniella DellaGiustina, lead image processing scientist for OSIRIS-REx.

"By getting a dataset of an entire asteroid and going from that scale all the way down to centimeter-sized pixel imaging, we can really begin connecting asteroids to the meteorite population we have in our labs," DellaGiustina says.

To do so, the team had to invent new techniques and augment available mapping software to capture an accurate representation of Bennu, an irregularly shaped object whose surface is studded with boulders, including some the size of a parking garage and with overhang.

"One coordinate system is not enough, so we are working in both latitude and longitude and cartesian coordinates all the time," DellaGiustina says. "This allows us to generate 3D point clouds and assign precise coordinates to every pixel."

Covering new ground for future touch-down sites also is a declared goal of ongoing Mars research at the UA, including a shallow-ground radar mapping mission proposed by Lunar and Planetary Laboratory Deputy Director Shane Byrne. One of the requirements is to look for water ice deposits shallow enough that astronauts can get to them and use them as a resource for fuel and water. Meanwhile, the HiRISE team is currently scouting potential landing sites on Mars' midlatitudes for Elon Musk's Space X company.

Through recent hires of radar mapping experts, the UA has become one of the premier institutions for radar imaging science, says Ali Bramson, who recently graduated with a Ph.D. from the Department of Planetary Sciences and now is a postdoctoral fellow in Carter's group. Together with Eric Peterson, a postdoctoral fellow on the team of professor Jack Holt, who joined the Lunar and Planetary Laboratory last year, Bramson is part of a project that integrates datasets from many different imaging techniques to paint a more complete picture of ice hidden underneath the Martian surface. The goal is to produce a data product that could be used in planning crewed missions.

In addition to enabling future human exploration missions to Mars, this research helps answers fundamental questions about how the red planet came to be what it is today, Bramson explains.

"By mapping the subsurface ice, we can try to piece together the planet's climate history," she says. "This allows us understand the natural climate shifts without the confounding factors that we have on Earth, such as human population, vegetation and oceans."