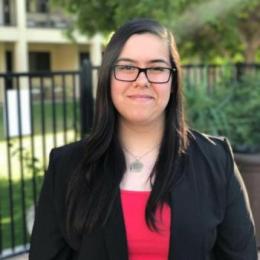 Newest Brookie Angelica Berner will be working at DigitalGlobe, and was matched with former NASA astronaut Scott Parazynski as her executive-level mentor. Photo courtesy of Angelica Berner.

Berner, who graduated from Arizona State University in December 2018, is one of 38 women awarded this fellowship for 2019.

Each is paired with a 12-week summer internship at a leading aerospace organization and partnered with executive-level mentors in their field.

Berner will be working at DigitalGlobe in Westminster, Colorado.

“I was recently matched with Scott Parazynski, a former NASA astronaut — among a lot of other amazing things — as my executive level mentor,” Berner said. “I'm looking forward to working with him on developing the next steps I'd like to take in my career.”

Berner will also join other fellows for the Brooke Owens Fellowship Summit during the summer. The summit will feature team projects, one-on-one mentoring sessions and Q&As with congresswomen, astronauts, CEOs and company founders.

“Interacting with the other fellows has been phenomenal — it's extraordinary how much talent is in this group,” Berner said. “It's also nice to have a group of people who have similar experiences as they begin their careers!”

The fellowship was created to support and inspire talented professional women in aerospace and named for acclaimed pilot Dawn Brooke Owens, a much-beloved expert and pioneer in the space industry. After Owen’s passing at the age of 35 from breast cancer, the fellowship was created to honor her legacy by three of her close friends: Lori Garver, former deputy administrator of NASA; Cassie Lee, former head of space programs for Paul G. Allen; and William Pomerantz, the vice president of special projects at Virgin Orbit.

The fellowship is highly competitive and draws hundreds of applicants at more than 125 universities in 13 nations. Berner described the multistep application process as, "unlike anything she had experienced before."

“(The fellowship) encourages each applicant to not only introduce their ‘on paper’ self but to delve deep into who they are outside of their education/career,” she said.

After an intense process of interviews with various leaders in the aerospace industry, Berner received a call from one of the founders to tell her that she had been selected.

“She was very patient and enthusiastic as I told her how excited and humbled I was (and still am) to have received the opportunity!” Berner said.

“As I prepare for my internship at DigitalGlobe, I'm beyond excited to have the opportunity to work in the aerospace industry with such an awesome company!"

Berner grew up in Chicago, and graduated from ASU as The College of Liberal Arts and Sciences Dean’s Medalist for the Department of Physics.

She participated in the ASU/Nasa Space Grant for two years and completed a summer internship at the NASA Langley Research Center.