Congratulations to ASU Intern Sarah Rogers and the Phoenix CubeSat Team, who will be launching their "Phoenix" satellite into space this Fall! 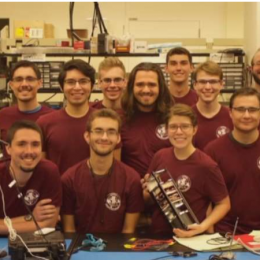 Standing only a foot tall, the cubed shaped, shiny satellite could be the future to understanding temperature and climate on earth.

All of it is made possible by a group of inspiring Arizona State University students.

'To finally see everyone's work over three years just represented as one system,' said student researcher Sarah Rodgers. 'It's more than I can describe.'

The device is called the 'Phoenix,' a perfect name given the machine's purpose.

Soon it’ll be used to track thermal heat in certain cities, including in Phoenix.

The goal is to understand where certain energy comes from and help places become more energy-efficient and clean.

'The hope is that if the mission is successful and we get data that anybody across the world can use the data,' said Jaime Sanchez de la Vega, a student scientist.

'Phoenix' doesn't launch into space until next month. Yet, you could say its inventors are already in the stratosphere.

'Our friends were like, 'You should get a bed in the lab because you're never at home!'' said student scientist Vivek Jacob Chacko.

Rodgers shared some of the challenges students have faced.

'Everyone has a different vocabulary,' said Rodgers. 'And so, in the beginning, communicating with everyone was very difficult.'

It was tedious, time-consuming teamwork that led to triumph.

Last month, NASA confirmed 'Phoenix' would be heading into space this fall.

'It was incredible. [There was] too much excitement. I was screaming over the phone,' Sanchez de la Vega said.